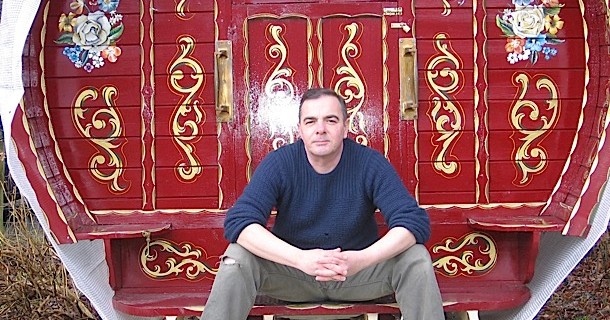 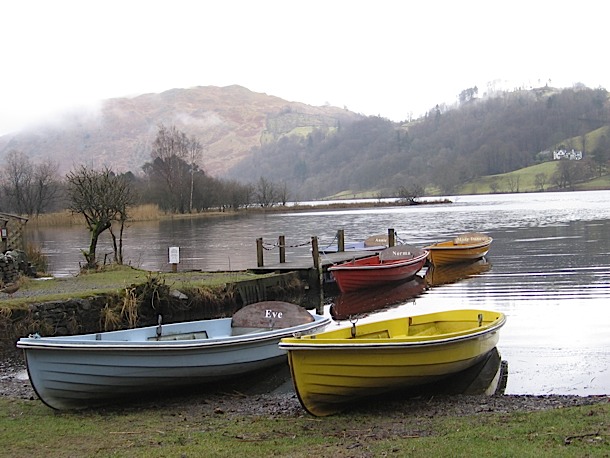 Rick Martin is a Romany gypsy who blends his own fine teas and hires out rowing boats from his lakeside kiosk Faeryland, which is set in a sheltered inlet beyond the village. It is the most picturesque of places and I’ve wiled away many an idle moment there. The bay is protected from the worst of the weather by trees and two promontories of land that give a pincer effect separating it from the main body of the lake and through which you must pass to get into open water.

Each Spring Grasmere’s resident mute swans Henry and Henrietta build a nest on the edge of the headland and while she sits quietly with her brood, he patrols the channel. He’s a cantankerous, unpredictable old sod and passing through can be like navigating the Straits of Hormuz – anything can happen. The situation isn’t helped by the shallows where the long-fingered weeds cling to the hull giving the effect of rowing through treacle and it’s always with a sense of relief that you get through and out into deeper water without incident. I feel myself fortunate that, while I’ve often had him trail in my wake or glide alongside like a frigate, he’s never actually had a go.
He finds canoeists particularly objectionable and has capsized a number of unsuspecting enthusiasts over the years by approaching at speed then flying low at them to knock them off balance. The poet Carola Luther, herself a keen canoeist, spent many hours out on the lake, but on occasion Rick had to place himself in a boat between her and Henry to allow her safe passage. Familiarity is no guarantee. He fears no one, this is his territory and the decision to let people pass is entirely at his discretion.
He’s there as I write – regal and proud: policing the channel; casually scanning the lake and shoreline for his next victim.

Losing the Swan
By Carola Luther

open: a propulsion over my head, swan
so close I glimpsed the sinews joining
wings to body, saw them stretch, bunch,
stretch out, the lengthening pits of axillae.
Size of a small goat, that torso.

There was the whirr, the industry of wings,
but I swear I also heard the swan’s beak
sawing at air like a handheld saw
would do, as if it had to, like a birth,
to make room in the world for itself,

for the narrow head, the body, heavy
as a child’s, wings spread wide as arms.
Who but a pilot could have imagined
the obstinacy, the intransigence of air?
The swan flew over Grasmere

straight towards the snows of Heron Pike.
I waited for the turn, its wheel back
across the water. It was now or never,
or so it seemed, but at that moment,
a fighter-jet corkscrewed in, split

second before its sound, and slit the day.
I’d lost the swan. When I looked across
it was gone. Questions: had it sensed
the coming of the plane? Did it flee from it
or play? Presaging (perhaps with glee)

the arrival of the dark familiar; sibling, family?
Or was it all coincidence, and in its routine,
did the swan wing-dip at the usual time,
to make a perfect turn despite the sound,
and with aplomb – or indeed, lumpish – land

next to its mate, gliding behind the island?
I tried out the stories. As I walked back down
and the snow began, I turned to magic –
it was clear there was no swan upon the lake.
Perhaps (and would I the stranger

ever know?) it did not land, but in some snow-pact
with Heron Pike, kept on going, kamikaze pilot,
a scout for all the forced-out, disappearing things,
and flew its density of down and hammer-heart
straight into the quietly opening mountain.

Make a bouquet garni consisting of Saigon cinnamon, cloves, ginger, lemon, lime, sencha green tea and Sudanese organic hibiscus (ready made packs available from Faeryland). Add to 1/2 litre of just boiled water. Leave it to infuse for 20 minutes or until the water has turned deep pink.
Add 1 litre of pure apple juice and place in the fridge. Heat to serve.
You may wish to add a sneaky red wine or sloe gin to the heated drink for that extra kick.

Next week: Golden Wonder winds the church clock, and puts up the flag.