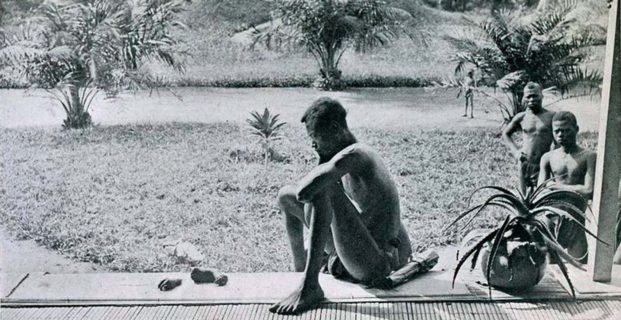 `We are having all these people from shithole countries come here!’

And in a tweet aimed at Somalia-born Democrat, Ilhan Omar

`Why don’t they go back and help fix the totally broken and crime infested places from which they came. Whose governments are a complete catastrophe, the worst, most corrupt and inept anywhere in the world?’

`Women could be at risk of sex attacks carried out by gangs of migrant men.’

`Sirte [Libya] could be the next Dubai, once they clear away the dead bodies.’

With these remarks the perception and portrayal of Africa and Africans as savage, corrupt and uncivilized continues.  And while there is no denying the conflicts and massacres that have occurred in recent times: Biafra, Rwanda, Mozambique, Sudan, Sierra Leone, Congo… At the same time, it’s important to understand the root causes.

The photograph was taken by Alice Seeley Harris, a missionary in the Belgian Congo in the early twentieth century. It’s a picture of Nsala, staring at the severed hand and foot of his five-year-old daughter, Boali.

In 1885 the Belgian King Leopold, claimed 240.000 square kilometres either side of the Congo river as his `own personal slice of the African cake.’ He claimed to be on a philanthropic mission to end slavery and civilize the region. In reality he intended to get very rich off the high demand for rubber from the trees that grew naturally there. To achieve this, he formed a rubber company with its own private army. Armed militia would enter villages, hold the women and children hostage, sending out the men to find and tap rubber trees. They were given quotas, failure to meet them resulted in death or mutilation.

Alice Seeley Harris encountered Nsala in the aftermath of one such raid. She would later recount the story in her book, Don’t Call Me Lady

He hadn’t made his rubber quota for the day so the Belgian-appointed overseers had cut off his daughter’s hand and foot. Her name was Boali. She was five years old. Then they killed her. But they weren’t finished. Then they killed his wife too. And because that didn’t seem quite cruel enough, quite strong enough to make their case, they cannibalized both Boali and her mother. And they presented Nsala with the tokens, the leftovers from the once living body of his darling child whom he so loved. His life was destroyed. They had partially destroyed it anyway by forcing his servitude but this act finished it for him.

All of this filth had occurred because one man, one man who lived thousands of miles across the sea, one man who couldn’t get rich enough, had decreed that this land was his and that these people should serve his own greed.

Leopold’s quest for rubber: the `Unimaginable horror’ as Conrad had it, resulted in the deaths of up to 10 million people.

Forty years earlier, while travelling through East Africa in search of the source of the Nile, the explorers Sir Richard Burton and John Hanning Speke encountered firsthand the then thousand-year-old Arab slave trade.  Burton was a well-travelled, worldly man, but the horrors they witnessed would haunt Burton for the rest of his life.

He recalls one such incident involving their Arab guide.

The Kirangozi or Mnyamwezi guide, who had accompanied the Expedition from the coast, remained behind, because his newly-purchased slave-girl had become foot-sore, and unable to advance; finding the case hopeless, he cut off her head, lest of his evil good might come to another.

Africa has been traumatized. And having endured so much suffering it should come as no surprise that the African countries: the map of the continent, created by foreign powers, should have struggled to stabilise and democratise in the post-colonial era. The demarcation lines between countries, rather than running along natural boundaries such as rivers and mountains, are drawn in a grid-like system, cutting through traditional tribal borders. It has the effect of empowering one group whilst dividing and weakening another.  Massacres in Biafra and Rwanda were a direct result of this.

It’s equally unsurprising that brutal dictators such as Amin and Mobuto should emerge from the colonial wreckage. The likelihood of an abused child becoming an abuser themselves is proportionally high. Power, they’ve witnessed, is maintained through intimidation and fear.

That much of Africa has managed to come to terms with its past and overcome these difficulties, emerging as peaceful law-abiding democracies with small, but vibrant economies, is something to admire and applaud. But there’s still some way to go,

All of which brings us to the present, where a new geo-political push for Africa is taking place. China, Russia and now the US, are all moving in for a slice of the cake. If history teaches us anything, you can guarantee that the interests and welfare of the African people won’t be the priority. What Africa needs is investment in transport and infrastructure which would allow the smaller countries to trade with each other. The resources are there, it just needs the logistics and political will and vision to carry it through. A continent-wide trade-bloc would be beneficial to all.

These are new countries taking first steps. The brutality and barbarism of the not-so-distant past sit uneasily beneath the surface. In many places power still resides in the barrel of a gun and people continue to be forced from their homes and land. The current migrant crisis, seized upon by populist politicians for political gain, is a direct result of this. But, when they pause and ask themselves, why these countries can’t stabilise? Why, the conflicts and arbitrary massacres seem almost cyclical? I would suggest they look at the photo of Nsala with the remains of his daughter – his punishment for not collecting enough rubber – and find your answers there.