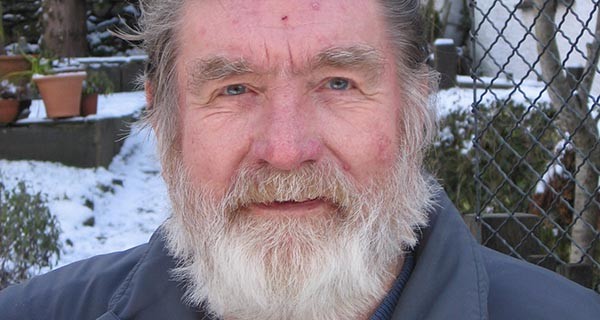 Donald Woodburn is a local builder who built the Wordsworth museum here in Grasmere and completed major restoration work on Dove Cottage in the 70s. My job of maintaining Dove Cottage and the grounds has required me to consult with him regularly over the years and his help and advice have been invaluable. Many of our consultations have taken place at Tweedies Bar, the local pub, and on one such occasion he told me this story.

Donald was born in a farmhouse a few miles from Grasmere at a place called Wray, which was then part of northern Lancashire. They had no electricity or refrigeration and they reared pigs and grew potatoes to supplement their larder. He was only a boy at the time but he remembers vividly the process of extracting the pig’s blood and preparing the animal for curing.

Once the pig had been selected it was taken to a cellar where the flagged floors had been scrubbed and covered in salt. It was then placed in a sheep crush where its throat was washed and carefully shaved. A warm metal bucket containing a few inches of hot water was placed beneath and a steel rod was then inserted into its throat releasing the blood, which was slowly stirred with a wooden stick until the bucket was full and the poor animal weakened and collapsed in the steel frame. The bucket was then taken to the kitchen and emptied into a pot where it was boiled with oats before being left to cool and solidify. The conditions had to be just right in order for the process to work. The temperature of the room and the blood had to be the same and menstruating women weren’t allowed near as it was felt they’d turn the blood ‘bad.’ The carcass would be shaved and butchered and a mixture of salt and saltpeter was moulded around the joints to prevent them becoming flyblown. They were then hung on hooks and left to cure.

Donald tells of how cruel it was and he still sees those pigs slowly dying before him as the life drained out of them, but it was nearly seventy years ago:  they were subsistence farmers and as he says ‘that’s just what people did back then.’

When they killed the pig –
slit its throat to make their pudding –
they wouldn’t let me come near:
said it was the wrong time;
that I was unclean.

So I crept round the back
of the sty; watched
as they bled it to death.
Who would have thought the old man
to have had so much blood in him?

They brought it to the kitchen in a bucket.
Mother set to work stirring in the oatmeal.
I watched it thicken; thought of the dark stuff
inside me, working its way out in painful clots.

When it was ready to eat,
they tucked in.
I couldn’t look:
didn’t have the stomach for it.

Place steak and kidney in a pan and bring to the boil: add chopped onion and black pudding: sprinkle oxo cube then leave to simmer for two hours adding mushrooms (optional) later on.

When the meat is tender place an eggcup at the centre of your baking dish and carefully pour out the contents making sure to wiggle the eggcup so that you don’t get an air-lock. (It could blow the lid off!) Roll out the pastry and place it over the dish – the eggcup will prevent it collapsing – seal and brush with a beaten egg and place in the oven for thirty-five minutes.

I haven’t tried it yet but it sounds delicious.

Next week: In search of the Golden Eagle with Mountain Man