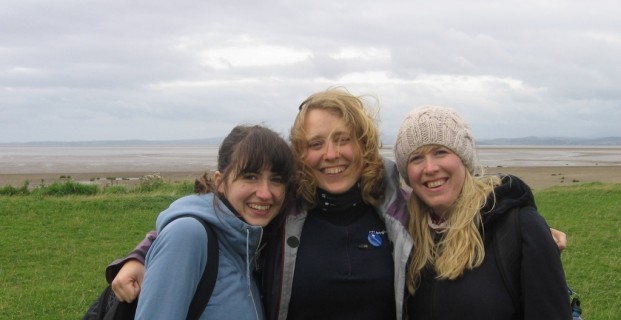 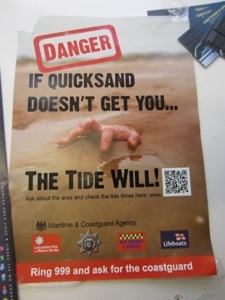 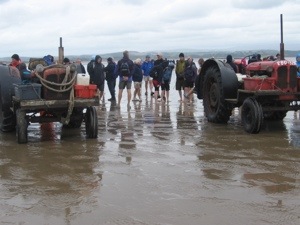 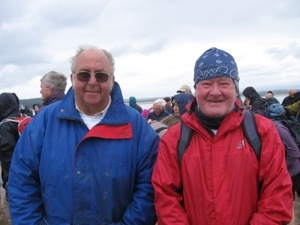 The tidal bore that emerges from the Lune Deeps at the mouth of Morecambe Bay is said to run faster than a galloping horse, flooding the channels that cut through the sand silently and rapidly in minutes. It’s deceptive and lethal, with the graveyards and memorials around the bay bearing testament to its speed and unforgiving nature.
Patches of quicksand that can shift a hundred metres in as many hours; coupled with weather systems than can give the effect of turning the bay into a washing machine, add to its unpredictability.

It’s also one of the most exhilarating places to be and last weekend I, along with my colleagues Jane, Esther and Catherine, joined Alan Sledmore and Jack for a nine-mile guided cross bay walk from Hest Bank to Grange over Sands.

Jane Connolly, Esther Rutter and Catherine Harland make up part of the Wordsworth Trust’s permanent staff. They are firm friends and we’ve known and worked alongside each other in various capacities for over four years. They are graduates of Leeds, Oxford and Durham respectively and are great fun to work with, and hang out with socially. Prior to setting out, I was bit concerned about their fitness levels (they’ll kill me for this), but needn’t have worried as they made the crossing with the agility and grace of gazelles.

Before the road and rail networks connected what’s now South West Cumbria with Lancashire, travellers wishing to make the journey north / south took the treacherous route across the sands, but these days, fisher folk aside, the trip is made purely for pleasure and we set out with a hundred or so fellow pilgrims and what seemed like half of the local fishing community, as back up, to make the crossing.

Jack has the look of a man who has spent all his life on the sands: red faced and sporting a bandana he reads them and knows their ways. He’s also a great character and a reassuring presence on such a long and arduous crossing. The ever changing nature of the bay make no two days the same and while I personally have made the journey on a number of occasions we’ve never taken the same route twice, making each experience unique.

We’d been walking for an hour or so when we came upon an island that had reappeared this year after the winter storms. It had lain buried for over eighty years re-emerging overnight with its century old nets and fish traps still intact. Jack informed us that they’d begun to catch fish again, though the channel the nets had once faced had moved ninety degrees to the right in the decades since the island vanished beneath the sands.

Four hours after setting out we reached our destination; tired and windswept, but with a sense of achievement that we’d made the crossing safely and without incident. We dried ourselves off and put on our boots to walk the few hundred metres to the station, to board the waiting coaches that would take us back to our starting point. Half an hour later the channels were full and the bay was once again beginning to flood.

The web address for Alan’s walks featuring times and details is:
www.morecambecrossbaywalk.co.uk

Place the butter in a pan to melt with the pepper and a good pinch of nutmeg.
Once melted, add the shrimps. Stir well over the heat and season – you won’t need much salt as the shrimps are already quite salty!
Place the shrimps into little pots or tea cups (1 per person) and press down.
Top with the remaining butter left in the bottom of the pan and chill in the fridge, or can be served warm straight away.
Perfect on hot brown toast or with a watercress salad.

Next week: The Reading Room